Unlike most recent mornings, Sunday, February 22, 2015, dawned mostly clear and bright. With a few inches of fresh snow having landed the evening before and making for sloppy driving conditions, our merry all-girl band of crazy sisters, a mother-daugher duo, BFFs, and the fearless Shyla-dog arrived at the trail head 15 minutes late to find Simon, our Maine Appalachian Trail Land Trust guide, waiting with a bag of fresh donuts and a big smile.

Snow shoes attached, packs adjusted and poles locked, we began our trek to Table Rock on Baldpate Mountain in Grafton Notch State Park.  Table Rock is a gigantic and relatively flat rock that sticks out from the mountainside affording those brave enough to venture out onto it a 180 degree-plus view featuring Old Speck – a 4,000+ footer – that sits directly across the notch, and Sunday River Whitecap’s peak in the distance.

With an elevation gain of just about 1,000’, and just over a mile to our destination ahead of us, we trekked through a few inches of fresh snow on a small section of the Appalachian Trail that had, thankfully, been broken by someone else several days earlier. Throughout most of our hike the narrow trail was banked by hip-deep snow on either side. Anyone stepping off of the packed trail found themselves sunk deep into about 4’ of light snow – especially once when Linda’s snowshoe was off and earlier when a little instant karma caught up with Terri as she tried to dump snow onto someone’s head from an overhead branch causing her to lose her balance, trip, and fall into a tree well, much to everyone’s delight.

About a half mile into the hike, the AT meets up with Table Rock Trail on the right. By that point in time sunny skies had brought warmer (again, relatively) temperatures and most of us began removing and stowing layers of clothing.

As we continued on toward Table Rock, the trail climbed gradually through beautiful woods with filtered sunlight. We laughed and chatted our way past evergreens heavy with snow, hardwoods that had lost their leaves allowing us a few moments of glorious full sun, over the occasional fallen log and stream, and up several steep sections where the footing was difficult but which, with a little help from our friends and trusty snowshoes, we took in stride.

After an hour or so on the trail we walked onto Table Rock. Although the wind had picked up, we were rewarded with lovely views up and down the valley. Snacks and beverages were passed around and photos of vistas and happy faces snapped before it was time to turn around and head back down.

The hike out was very pleasurable, with soft snow treating middle-aged knees kindly and steep sections making for great snowshoe “luge” runs and lots of laughs.

Returning to our vehicles we said goodbye to Simon and made our way to the Sunday River Brew Pub for lunch and laughs, and to plant the seeds for our next adventure. 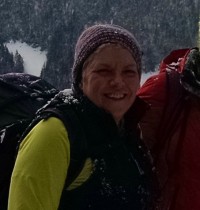 Deborah Carroll is one of the crazy sisters whose sense of adventure brings them to places like mountain tops and wild rivers.  She is a freelance writer and photograph who “has a thing” for great food and has been known to jump out of perfectly good airplanes on a moment’s notice.