Wabanaki: People of the Dawnland 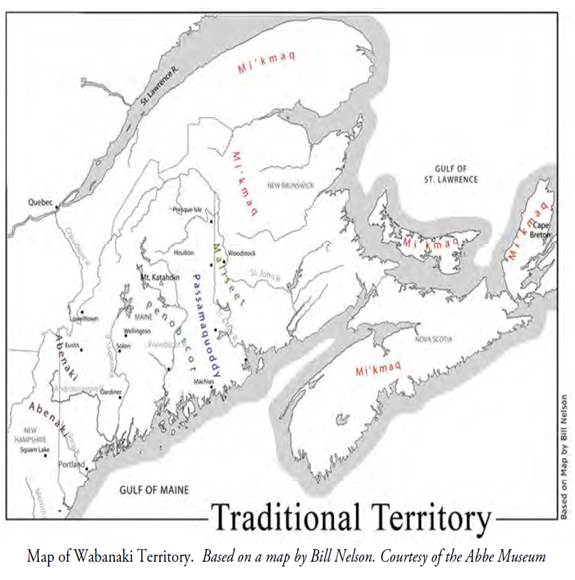 No discussion about land and land conservation in Maine would be complete without acknowledging and briefly describing the history of the interaction between two peoples and the land use practices and property ownership concepts that distinguished them. For the Wabanaki Confederacy, and in particular the Penobscot people who were the original inhabitants in much of the A.T. landscape, Maine is their Homeland:

When European colonists arrived in Maine the result was “on one side, an evolving capitalist property system that treated natural resources as economic commodities and that granted landowners extensive, exclusive land exploitation rights, and, on the other side, an Indian property system characterized by complex shared land use rights and more ecologically stable land use practices” (Freyfogle 718). Between 1616 and 1619, between 75 and 90 percent of Native Americans in Maine died from European diseases during The Great Dying, and further wars with and among the colonial powers took their toll in the early 18th century. The European system of land ownership became fully entrenched in Maine and continues to exist over this landscape today. The people of the Wabanaki Confederacy were left with little choice but to try and recover portions of their Homeland via treaties:

Today, the Penobscot Nation occupies only a fraction of their ancestral territory, which is divided into Reservation Land, Trust Land, Fee Land: