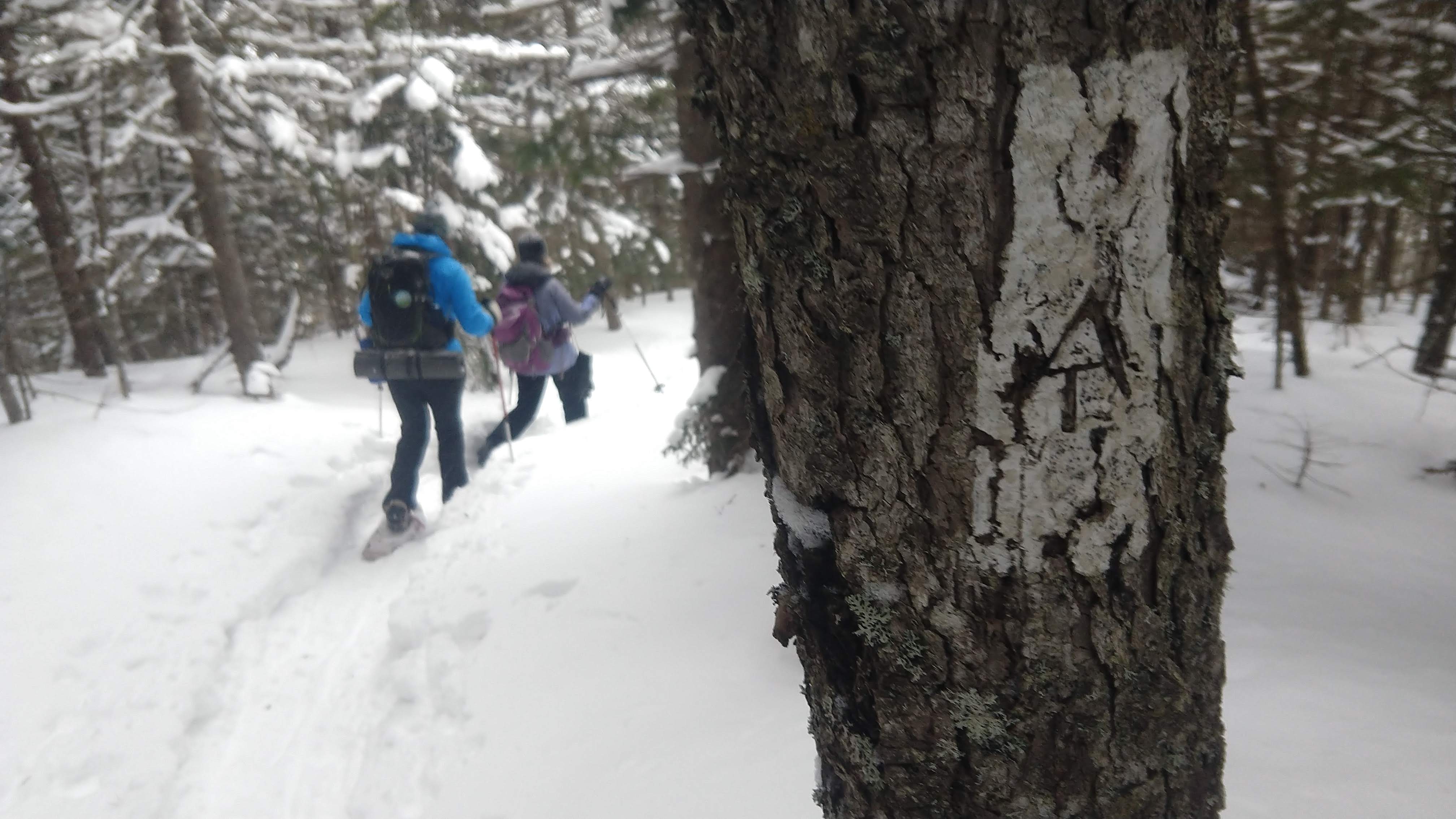 By Meg Clews
On a brisk February morning, a group of intrepid women gathered in Portland to organize the carpool up to Height of Land, 30 miles north of Rumford, where out trek would begin. Also joining us was Simon Rucker from Maine Appalachian Trail Land Trust who would be one of our two guides for the day. We left Portland around 7:30 in two vehicles.  One car made a brief stop at the Lewiston Park and Ride to pick up Mark (our other guide) and his trusted canine companion Benton. After a brief pit stop in Rumford for humans and dog, we arrived at the parking area at Height of Land around 10am. Another car with 4 more LAC members joined us there, and we all headed out at 10:20. The view to the Northwest, over Mooselookmeguntic Lake and beyond was clear and beautiful!  With snowshoes on, we hiked south along Route 17 for approximately .4 miles to where the AT crosses the road. Here, we headed north on the AT.  Right away, the trail went steeply up Spruce Mountain, through deep, soft snow. Several of us took turns breaking trail, which was hard work, but served to warm us up! After the strenuous uphill, the trail leveled out, and we had to make a few detours around some blow downs. We saw moose tracks and scat along this section. The snowpack that we were on top off was at least 3 feet deep – you could tell by the white blazes on the trees that mark the AT – they were about 2 feet above the snow and these are usually just above eye level in the summer! There was another climb, and then we went down and crossed a well groomed snowmobile track. From here, we trekked along a gentle down hill, and then a level section which had very deep snow with uneven terrain. At one point while Gillian was in the lead, one of her snowshoes went in so deep she become stuck in the snow. It took two of us about 10 minutes to dig her out. There were Gray Jays at one point, and one that landed on an outstretched hand!  Eventually we arrived at the north shore of Moxie Pond and around 1:15. Here, we stopped for about 30 minutes for a standing room only lunch, and a group photo. Everyone was staying warm and dry, and there were plenty of hand and foot warmers to go around. Simon and Gillian had plenty of yummy snacks to share.
The return trip was much faster than the way in – we were following a nicely packed trail and made excellent time, returning to the parked cars around 3:15pm. There was a gentle snow falling as we hiked out, and when we reached Route 17, the view was completely clouded over and a strong wind was blowing across the road. I estimate our  total mileage was around 4.5 -5 miles round trip.
I went to bed that night with a perfectly drowsy and happily satisfied feeling after my first day out with The Ladies Adventure Club!