Who Was Benton MacKaye?

Benton McKay is credited with conceiving the idea of a continuously marked trail along the crest of the Appalachian Mountains. McKay wrote about his vision in an article that appeared in the Journal of the American Institute of Architects in 1921. The first section of the trail was constructed in Harriman State Park in New York in 1922; the final section was added in Maine in 1937. 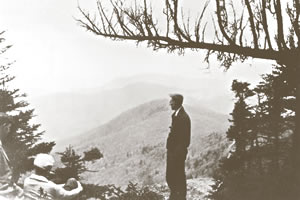 Benton MacKaye (1879-1975) first published the idea. He grew up in Shirley Center, Massachusetts, reading the work of American naturalists and poets and taking long walks in the mountains of Massachusetts and Vermont. MacKaye (which is rhymes with “sky”) sometimes claimed that the idea for the A.T. was born one day when he was sitting in a tree atop Stratton Mountain in Vermont. But, after graduating from Harvard, he eventually went to work in the new U.S. Forest Service and began carving out a niche as a profound thinker and an advocate for wilderness. By 1919, his radical ideas had led to him being edged out of the USFS, and he turned his attention to creating a new discipline that later came to be called “regional planning.”

MacKaye was convinced that the pace of urban and industrial life along the East Coast was harmful to people. He envisioned the A.T. as a path interspersed with planned wilderness communities where people could go to renew themselves. That idea never gained much traction, but the notion of a thousand-mile footpath in the mountains fired the imaginations of hikers and outdoorsmen from Maine to Georgia. Inspired by him, they began building trails and trying to connect them.

What Was His Connection to ATC?

Some perfunctory scouting of routes took place. A few short sections were marked and connected. New trails were built in New York. Welch designed a logo and Trail markers. Committees met in a few northeastern states and talked about the idea. But, for several years, the idea didn’t really go anywhere. MacKaye was much better at inspirational abstract thinking than practical organizing, and it soon became apparent that someone else was going to have to take the lead for the Trail to actually get built.

Who Pushed the Project Forward? 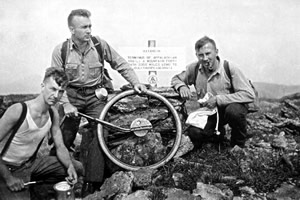 Two men, retired Judge Arthur Perkins of Connecticut and admiralty lawyer Myron Avery of Washington, D.C. Perkins took the idea and ran with it, essentially appointing himself as the acting chairman of ATC in the late 1920s and recruiting Avery to lead the effort in the area around Washington. Both began vigorously proselytizing the idea of the Trail in 1928 and 1929, championing MacKaye’s ideas to recruit volunteers, establishing hiking clubs up and down the coast, and actually going out to hike, clear brush, and mark paths themselves. As Perkins’ health failed in the early 1930s, Avery took over, devoting incredible time, energy, and willpower to establishing a network of volunteers, developing clubs, working with the government, building the organization of the ATC, and setting the Trail’s northern terminus at Katahdin in his native Maine. Avery remained chairman of ATC until 1952.