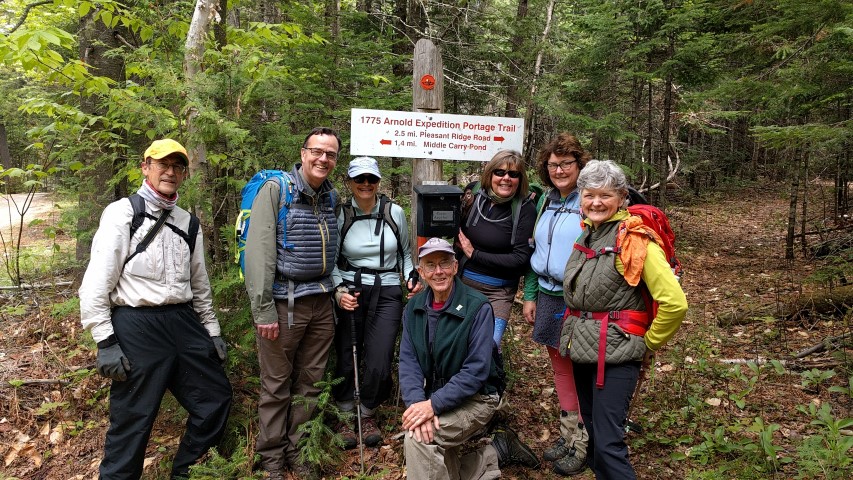 In 1775, the American Revolution was underway and the British hold on Canada was tenuous.  British troops were thinly scattered through Canada, mainly at Quebec City, Montreal and smaller garrisons in the Great Lakes.  General George Washington, newly inaugurated in July 1775, approved a two-pronged invasion of Canada designed to deal a serious blow to the British and further the American cause by bringing the Canadian territories into rebellion.

Thus began one of the great episodes in Maine history, chronicled in Kenneth Roberts’ famous novel Arundel.  In the fall of 1775, Colonel Benedict Arnold led a detachment of 1,100 American soldiers through the Maine and Canadian wilderness in what was intended to be a coordinated, secret attack on the British army fortified in Quebec City.  The overland route would follow a Native American trade route along the Kennebec and Chaudiere Rivers, using the Great Carrying Place Portage Trail through the Carry Ponds.  About 600 soldiers made it through the wilderness, encountering horrendous storms, flooding, disease and starvation before reaching the St. Lawrence River across from Quebec City. While their attack on the heavily fortified city of Quebec failed, this campaign continued until 1777 with the great American victory at Saratoga, in Northern New York which resulted in the defeat and capture of an entire British army and recognition of the American cause by the French government.

The Maine Appalachian Trail Land Trust is pleased to once again offer our Arnold Trail-Appalachian Trail community hike with Maine Historical Society.  The route of the hike will trace Arnold’s March from the Kennebec River to the Appalachian Trail, through spruce woods and ponds, over a trail created by the Arnold Expedition Historical Society that follows the route with 95% certainty.  Norm Kalloch of AEHS will be leading the hike, which traverses a ridge from the Kennebec River to the AEHS cabin on the east shore of Middle Carry Pond.  There are a number of historical sites related to the expedition along the route and in the vicinity of the AEHS cabin, sites which we will explore with Norm’s guidance.

This hike will be approximately 3.5 to 4 miles in length, depending on which sites the group chooses to visit.  Some participants can choose to remain at the AEHS cabin while others explore the area.  The terrain from the Kennebec River to the ponds is relatively flat compared to the mountainous areas of the Appalachian Trail, but there are uphill stretches and areas of rocky terrain.  All participants should be in relatively good shape and should prepare for a day in the woods.  Trip leaders will be spotting cars at the end of the route to carpool back to the starting point.

You must RSVP below for this hike, which is free to all members of the public.  Information about the meeting place and carpool details will be circulated prior to the event.  For all inquiries please email us at info@matlt.org or call 207-808-2073.

Tickets are not available as this event has passed.